How to Improve your Television Reception – Top 10 Tips 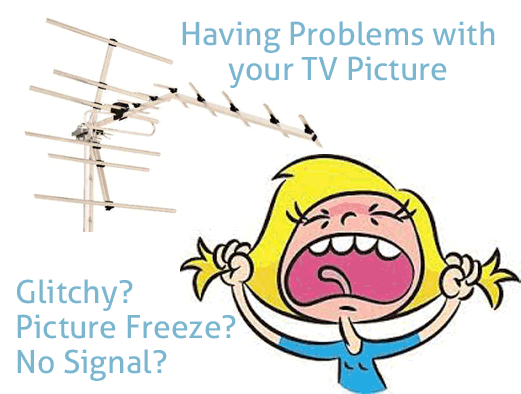 There is nothing more frustrating than poor TV reception! You are in the middle of your favourite Soap opera or your favourite football team are playing and it’s 0-0 with 5 minutes left to go. Then…. the picture pixelates and freezes and the audio start popping. How frustrating! Why is this happening? Why does it always seem to happen at the worst possible time!

Tips on How to Improve a Weak TV signal

Digital TV has so many benefits over analogue. It’s much more detailed sharper image, better audio and the ability to broadcast many more TV channels than analogue can. But here is the thing; its much less forgiving than analogue TV.  Yes, it gives more but requires more. As an experienced local aerial installer, let me explain.

The digital signal unlike Analogue, is represented by 0 and 1’s – put simply it on or off. When it’s on, it marvellous and when it’s off it’s awful. Analogue on the other hand is better represented as a wave, rather like a slopping hill. Yes at the peak of that hill the image is good but as you descend the slope of the hill it becomes more and more grainy. OK, you still have a picture and audio, but the quality is poor. Hence, there is a greater flexibility in the signal ranges acceptable reception, but the quality is nowhere as good as Digital TV. Therefore, to ensure a reliable high quality uninterrupted Digital TV reception you need a constant uninterrupted signal. A signal ideally from 45dB-80dB in strength and 100% in quality being preferable.

Therefore, if your Digital TV picture is pixelating and freezing the reason may simply be the TV Aerial /Antenna is not receiving a strong enough signal. This is why the picture freezes- it ‘falls off the cliff!’ We refer to this as the ‘Cliff Effect’ in the industry. Simply put, the signal drops off the cliff! Remember, Analogue signals are more like a slopping hill? Well Digital TV is more like a Cliff Face.

Now why might that happen? What causes this ‘Cliff Effect’?  We’ll consider 6 possible reasons:

What can interfere with TV signals?

What are the likely culprits of this phenomenon? Well, there are many these days the airwaves be so busy, but here are just a few culprits: 1) Mobile Phone 4/5G transmitters, these transmitters have to be relatively nearby to cause an issue but cause issues they do! A qualified TV Aerial Engineer will quickly ascertain after performing some test and spot the problem; we’ll discuss how he does that a bit later. If 4/5G is the problem, the solution is quite simple but more about that later.

All the above can be a real headache for a TV Aerial Engineer. Ambulance stations and some Fire and Police stations have transmitters, and they are powerful and depending on the frequency they are transmitting at, can cause interference with Digital TV signals- even satellite signals! Carlisle Hospital is an example in point. They have a very powerful transmitter on the hospital roof communicating with Ambulances in the local area and I was often called to houses nearby experiencing interference issues. Thankfully we always found a solution to the problem.

Wind Turbines can be especially problematic, especially a wind farms as the Turbines generate what is known as in the trade as ‘impulse noise’ this can cause interference with digital TV signals and in some cases Terrestrial TV might not even be possible! More about how to solve these problems a little bit later. Also, overhead power lines, whether these be Electricity pylons or train power lines. Once I had real problem installing a German TV satellite system on a farm because of the close overhead power lines, so you really need to know what to look for here with all of these potential issues and then more importantly, how to fix them, again more about that later.

How do you test my TV Aerial signal?

Firstly, it has to be said that experience counts for a lot here and there simply isn’t a quick diagnosis every time, sometimes you have to dig about  a bit and this is where calling a firm or an engineer who is qualified and has extensive experience with TV reception issues, is a must!

Call in an AV Engineer

A qualified TV Aerial Engineer will carry out a number of specific field tests with sophisticated signal and interreference testing equipment, namely a spectrum analyser. A spectrum analyser is not simply a signal strength meter but a much more sophisticated piece of equipment for analysing all parameters- signal levels- interference, BER (bit error ratio) and much more. A qualified TV Aerial Engineer will be able to use and more importantly, interpret the data from such a Field Meter as a Spectrum Analyser. Where a less qualified TV Aerial fitter may not. Hence if the problem is not correctly diagnosed the solution to the problem may not be found.

Hence when calling a Digital TV Aerial Engineer, make sure that he has the correct equipment and has experience with diagnosing these types of issues, believe me, it will save you money in the long run! We have over 15 years’ experience in this field and I cannot tell you the number of times we have been called out to jobs that an Aerial installer has had a go at, but has not been able to diagnose and rectify the problem but still has charged the client for, well not doing an awful lot!

So How do you fix these weak TV signal issues?

The first would be to determine the Digital signal level being received and the quality of that signal at the ‘head end’ (aerial/antenna) and at the TV point (where a TV is connected) and see what type of signal is being received.

Firstly, this may be  a low signal that is uncorrupted.

A spectrum analyser will look at a few things- 1). The power of the Digital TV Signal being received. 2) The Quality of that signal, is it corrupted- BER (bit error ratio). If corrupted, this can be improved by the use of a tall mast thus achieving a better ‘line of sight’ to the transmitter. At the same time moving the TV Aerial/Antenna away from the corrupting influence, say perhaps ‘Co Channel Interference’?  A good spectrum analyser will tell you where on the frequency band the problem lies.

If this is the issue, the next consideration would be the installation of a High Gain TV Aerial. These types of Digital TV Aerials usually have more elements and a larger reflector, thus capturing more of the available signal than a standard contract TV Aerial.  If this work around achieves the desired result, then the problem is solved. However, if the signal is better, but still not strong enough, then another option would be to add a taller mast thus attracting a better signal pathway.  If again the signal was improved but still below acceptable and reliable levels, then a MHA (Mast Head Amplifier) fitted to the aerial system would help boost the level of signal. An MHA boosts the available signal received to lift it above the acceptable threshold to ensure reliable reception. How are these set up and how do they work?

If the issue is interference then say as in the case of 4/5G a simple installation of a 4/5G filter at the head end will in most cases rectify the problem. If it’s overhead power cables, then correct placement of the TV Aerial/Antenna is critical, and the selection of a particular type of an Aerial. Preferably one without reflectors would be useful. Because, these types of TV Aerials can be less prone to impulse noise than those with reflectors.

Is it interference from Wind Turbines? Then in that case a Satellite TV system such as Freesat would be the best choice as these work on higher frequencies less susceptible to ground interference. Is it a neighbours Radio Transmitter? Well, you may need to talk with your neighbour to work out a mutually beneficial solution 😉

The world we live in is becoming ever more technological. So, we can expect the airways may become even more busy than they are at present. Summing up, Industry and product knowledge is ever more important. Therefore, skilled engineers must be the obvious choice to provide the solutions to the complexed world of Digital TV reception. Who when settling down to watch their favourite programme ever really gives all of this much more thought?  Because when it works well, hey it’s great. Only when it doesn’t then you need to call someone who knows what to do 😉

If you need any help, give me Mick a call and we’ll get to the bottom of the problem.